Another Legend similar to the I Ching origins is one where Fu-hsi was meditating by the River Lo, when a tortoise or a turtle emerged. He studied the markings on its shell, which revealed pattern on it’s back.  One with nine squares having marking inside each one.  The markings in each square that when added in a row of three in any direction equaled 15. 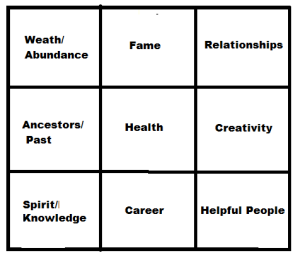 The Lo Shu square  is viewed as a harmonious blend of  9 archetypal principles of numbers and a cosmological plan of time and space that reflects the order of the universe. Such importance was laid on this configuration, that it was used as the ground plan for the nine palaces of the Emperor. As the intermediary between heaven and earth, he mirrored this cosmic plan by living and circulating around these palaces during the year. The plan was extended to the design of the capital city itself, with Old Peking at the centre and having eight avenues of access – symbolically the centre of the Middle Kingdom of the world. Today the square plays an intrinsic part in the geomantic art of Feng Shui.

Host an Introductory Workshop for your workspace, group or organization

Find out more on having a Home or Office Consult